The outbreak of war in Ireland in 1919 meant Wicklow Gaol was re-opened, this time manned by the Cheshire Regiment of the British Army.

By 1918, executions, internment, and generally cruel treatment of the 1916 rebels by the British government had helped to gradually turn the tide of Irish public opinion against British rule. Election success for pro-independence political party Sinn Féin the same year confirmed this. 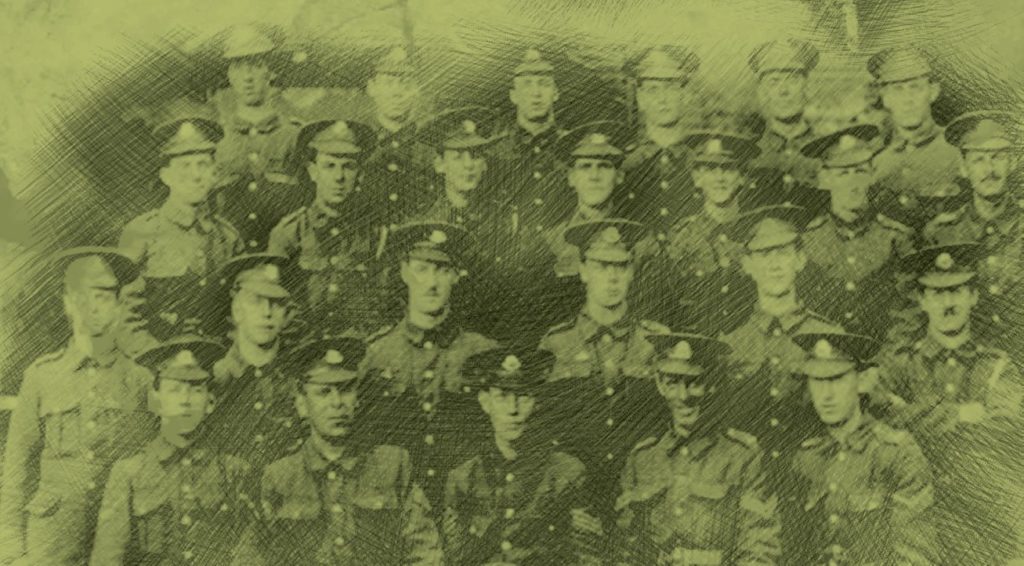 A group of British army soldiers.

War and Re-Opening of Wicklow Gaol

This widespread support for independence, along with staunch opposition from the authorities, (led to the 1919 Anglo-Irish War (known in Ireland as The War of Independence).

Although Wicklow Gaol had been closed since the early 1900s, it was decided that the building should be re-opened and the Cheshire Regiment stationed there.

About The Cheshire Regiment

The Cheshire Regiment was an infantry division of the British Army. It was a part of ‘The Prince of Wales’ Division. The Cheshire Regiment is one of only five regiments that, until 2006, had never been amalgamated with any other battalion. It survived, unchanged, in tactics and uniform for over 325 years.

While they were stationed in Wicklow, the principal targets of the Cheshire Regiment were members of the Irish Republican Brotherhood (IRB) and Sinn Féin.

Ironically, the Cheshire Regiment was originally created in 1881 by Hugh Culling Eardley Childers, a cousin of famed author and Irish nationalist; Robert Erskine Childers, later to be incarcerated in Wicklow Gaol before his execution during the Civil War.

Legend has it that, during the Cheshire Regiment period, a large hole was blown in the walls of Wicklow Gaol to allow Sinn Fein prisoners escape.